Be the first to review this product
₹6,400.00
In stock
Notify me when the price drops
Wish List Compare
Skip to the end of the images gallery 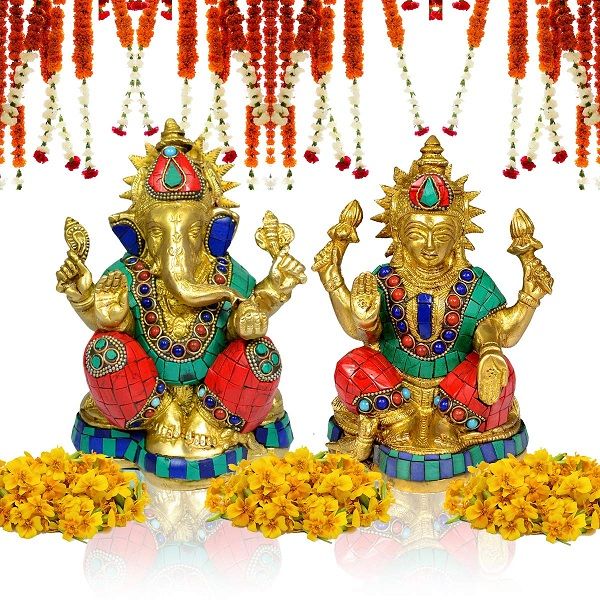 Skip to the beginning of the images gallery
Related Posts

Goddess Laxmi in Diwali Laxmi is the Goddess of wealth and prosperity. The word Laxmi is derived from the Sanskrit word Laxmi, meaning goal. She is also called Shri the female of the Supreme Being. She is worshipped for promotion, success and personal virtues.

Devi Laxmi was emerged during the churning of the celestial milky ocean by the Gods and Demons. Lakshmi chose Vishnu as Her Consort Vishnu carried Laxmi from the ocean into His heaven. Each time Vishnu descends on earth as an avatar. He is accompanied by an avatar of Lakshmi.

Hindus worship Goddess Laxmi in houses and temples by Her devotees. Special worship is offered to Her annually on the auspicious day of Diwali, with religious rituals and colorful ceremonies specifically devoted to Her.

He is the Lord of success and destroyer of evils and obstacles. He is also worshipped as the god of education, knowledge, wisdom and wealth. In fact, Ganesha is one of the five prime Hindu deities - Brahma / Vishnu / Shiva and Durga being the other four whose idolatry is glorified as the Panchayatana puja.

Care & Disclaimer : Color may vary due to photographic effects, Keep the Inder Dev away from chemical, Texture and weight may vary from the photograph.

Check items to add to the cart or

Please Enter your Email-id to get in touch with Us.